The Address Downtown Dubai hotel near the worlds tallest building ( Burj Khalifa) was gutted by fire this evening.

At least 16 people were injured after a huge blaze broke out from the 20th floor of the hotel.

This happened hours before New Year’s Eve fireworks was supposed to start at the nearby Burj Khalifa.

Guests at the hotel have been evacuated and fortunately no life was lost even though the fire spread very quickly. 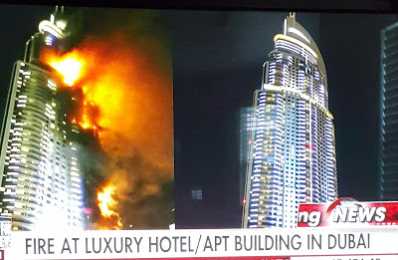